By Sara Harrison on March 27, 2013 in Career Development

Returning To Work After Maternity Leave Is Scary

Returning to work after maternity leave can be a scary, emotional and unsettling time. Your employers approach and the level of support you receive can make the world of difference to how well you adapt to such a challenging situation.

Helen Brimacombe a Senior Account Director at Savvy marketing returned from one year’s maternity leave in January this year.

Savvy  is owned and run by a mum of three and Helen’s direct boss is a mum of two. About 60% of the staff are women and of those about 35% are mums. Helen says, ‘The high percentage of mums at Savvy has really helped with me returning to work following maternity leave. There is empathy and reassurance when I have a wobble and that has been invaluable’.

Returning To Work After Maternity Leave Is Emotional

In order to help other mums with returning to work after maternity leave Helen shares her experiences.

‘I was so apprehensive about returning to work after maternity leave, I felt guilty about leaving my little girl with strangers and that the financial reasons for return seemed so superficial. In the first month of returning to work my confidence was at an all-time low, work felt completely alien and I’d forgotten the entire work lingo.

I just felt a bit useless and was of the belief that everyone at work felt that too’.

Helen explains how this affected her, ‘I got sad and emotional sometimes and didn’t want to be at work when I felt this. What exacerbated the situation was the guilt I felt about leaving my daughter, so in my mind’s eye I was a useless mum and employee’.

Helen is happier now; she describes what shifted her thinking, ‘After six weeks I noticed some changes in my daughter. She was more comfortable with strangers and her social skills had developed significantly, she was a content little girl and didn’t resent me for leaving her. This gave me a new perspective, nursery was good for her, she was developing well and the guilt gradually began slipping away. 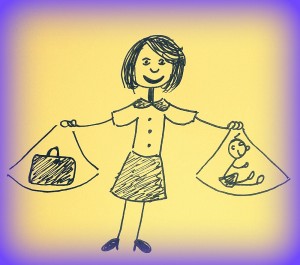 As the guilt clouds lifted my view on work became so much clearer. Returning to work after maternity leave was not just about money, I actually love my job and had worked hard to succeed; I couldn’t throw it all away. One day I was in a Senior Client meeting, I spoke with confidence and actually knew what I was talking about, I was back in flow. My self-belief, pace and efficiency increased I wasn’t useless after all.

Helen has now been back for three months, so what are her thoughts now? ‘I really believe I’m a better employee. My life has to be run like a military operation, so I am far more efficient and organised. Stress seems like a thing of the past, I just don’t sweat the small stuff anymore as I don’t have time! Having a child is the most wonderful experience, it’s physically demanding and I have created a good balance with 4 days at work and 3 days family time. I’m the happiest I have ever been and do feel I have it all.’

Top 10 Tips For Returning To Work After Maternity Leave

Helen summarises her tips for returning to work after maternity leave:

1.Expect your confidence to be low and give yourself time to build it up.

2.Start nursery a week before you commence work it helps with managing the emotions.

3.Do a practice run to nursery and work before you start.

4.Communicate to your employer if you’re feeling overwhelmed.

5.Before you return get into the habit of waking your baby early as though it were a working day.

6.Define your boundaries around working time and be committed to them, ensure work understand this.

7.Build a good support network, so you can rely on family and friends if you need to.

8.Give yourself permission to talk about your baby at work; it’s not unprofessional, as long as you don’t overdo it.

9.Buy yourself some new make-up and clothes before you return to boost confidence.

10.And finally…if you are unsure if returning to work is for you. I advise you to give it a try, after the first few months you will know whether it’s right for you.

Take Charge of Your Career

Let's work together to achieve your career goals. REQUEST YOUR FREE CONSULTATION NOW