By Sara Harrison on March 14, 2013 in Career Change, Career Development

For many years now various career tests have been used to help people decide on their career choices. Each test is based on extensive research and psychological theory. One of the most popular ones is the Myers-Briggs type indicator and assists in defining you as 1 of 16 personality types. The theory is that people have the most satisfaction in careers that allow them to express and use their own personality type and as part of the report a list of career suggestions will be produced for your type. 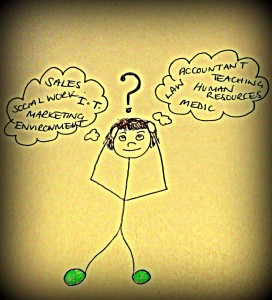 Another well known test is based on Holland’s theory of career choice. Holland suggests 6 different personality types realistic, investigative, artistic, social, enterprising, conventional with the equivalently named work environments. A good career choice would have congruence between the two, where the working environment would enable people to use their skills, abilities and express their values and attitudes freely.

Who Are Career Tests For?

Career tests can be used by anyone at any stage in their career. School leavers, graduates, career changers, career movers, career developers, and generally to improve self knowledge and to build better relationships

How Do You Apply The Career Tests

Your personality type does not explain everything about you, interests, skills, values and talents also need to be considered when deciding on career choices. The career tests are best used for exploring different careers rather than purely a career selection tool.  First build good self knowledge and use the findings of the tests to validate this knowledge. You know yourself better than any computer that says ‘NO’ to what you thought you were passionate about. Also remember you change as your experience builds and your career develops, so consider retaking the tests at appropriate intervals. Make sure you get support in discussing the career test results.  I remember as a sixth former being handed a report and I know with hindsight I took it too literally, but at the time I was so deflated by the list of suggested careers I put it in a drawer and never looked at it again! Had someone discussed it with me I would have felt less detached from the results. Finally..be wary of the free tests when you search the internet, for companies to use credible tests based on real research, it costs money, so free could be too good to be true and you may end up considering careers that are inappropriate for you.

Where Can You Find The Career Tests?

About the Myers-Briggs test

Do the Myers-Briggs Test

About the Holland Codes

Do the Holland Test

The tests will cost a few pounds to do, but if you get some friends/colleagues to join in, it’s a lot cheaper if you buy in bulk!

Take Charge of Your Career

Let's work together to achieve your career goals. REQUEST YOUR FREE CONSULTATION NOW